How to Never Die of Heart Disease 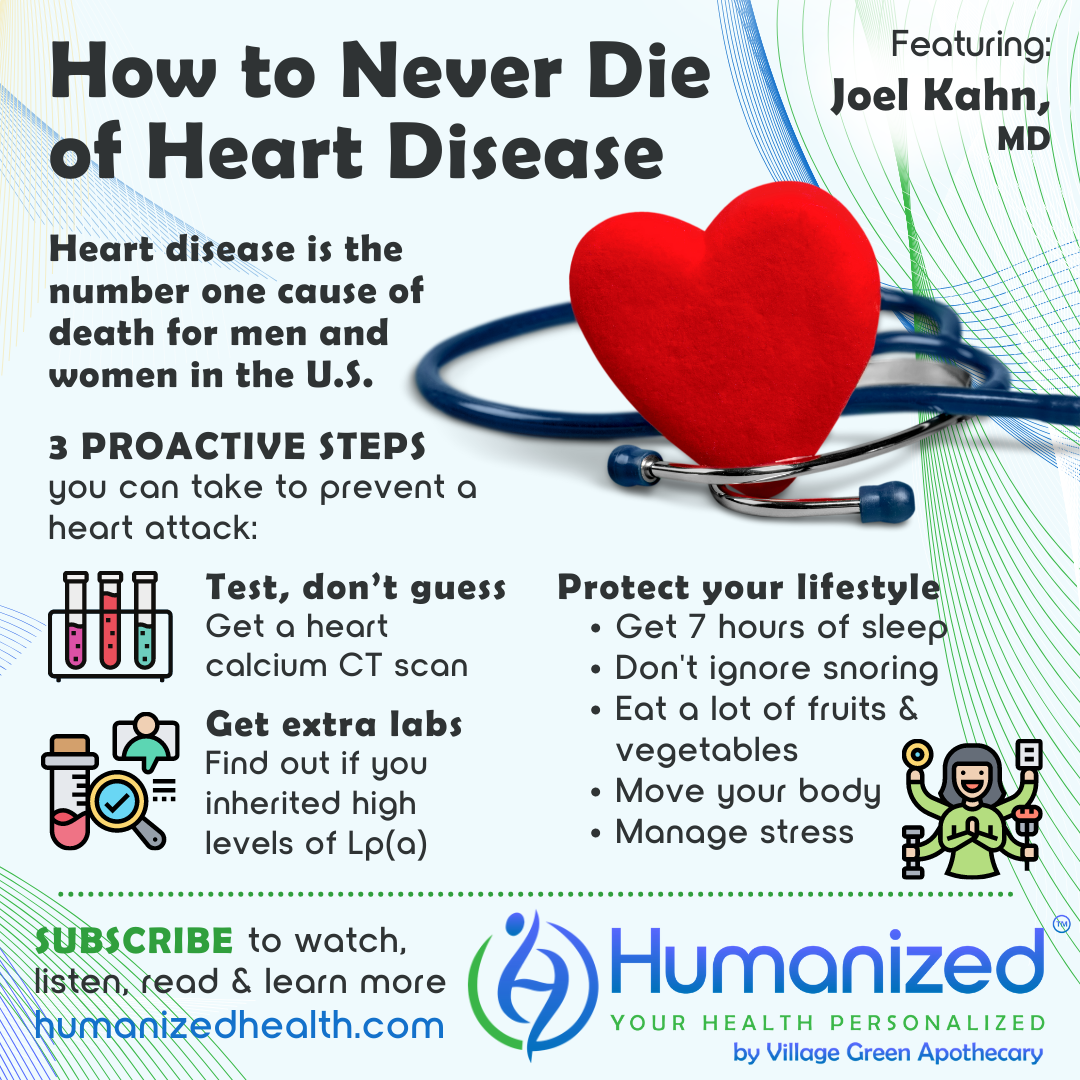 Rebekah Kelley: Welcome to the Humanized podcast, all about personalizing your health. I am your host, Rebekah Kelley. We have a great guest, Dr. Joel Kahn, and the subject of today’s discussion is How to Never Die of Heart Disease. Before I introduce Dr. Kahn, I want to remind everyone to subscribe to get all of our variety of casts in audio, video and transcription at HumanizedHealth.com. I’d also like to thank our lead sponsor, Village Green Apothecary, at MyVillageGreen.com.

Thank you so much for being with us.

Rebekah Kelley: So glad to have you, I’m going to jump right into the question, right? I just want to ask you, how do I know if I have heart disease?

Joel Kahn: You might have symptoms. So you never ignore tightness, pressure, nausea, palpitations, particularly cold weather, exertion, big time emotions, screaming… you never ignore that. Most people don’t have symptoms. You look at your ear lobes. There’s something called an ear lobe crease, diagonal ear lobe crease. Go look up on the internet a picture of Steven Spielberg. He’s got the most famous diagonal earlobe crease. An internist in New York city 50 years ago said when I see that, my patients have heart disease. It took 50 years to prove it, but in the last few years, it’s about 70% accurate. Don’t ignore it. Guys with erectile dysfunction are highly likely to have clogged heart arteries. The plumbing goes together. You don’t get a blue pill. You get a cardiac work-up if you have erectile dysfunction. I wish it was as easy with women. It just hasn’t been studied as a clue in women.

How do you know you’re not walking around with some blockage? And if you knew, would you eat different? Would you exercise different? The test was developed 31 years ago, it was over a thousand dollars. Now in Cleveland, it’s free. In Detroit where I practice, it’s $75. Anybody basically for the cost of a family of four dinner can, once in their life, we’re talking once, lie down, hold your breath, no needle, no injection – ba-doom! You find out if your arteries are clean or not. It’s called a calcium score. You want to be zero. If you’re like the woman that just walked out of my office and you’re 53 years old and your calcium score is 200, you’ve got a problem. And we figured it out, it’s cholesterol and it’s genetics and other things, and we’ve got a plan. So take the same approach. If you’re getting a mammogram and a colonoscopy and doing preventive medicine, get the heart CT calcium scan. You’ve got to ask your primary care doctor for a prescription

Rebekah Kelley: I did not know that. Is that even discussed generally?

Joel Kahn: Sadly, it’s 31 years of data, research, studies. It’s slowly, like in the last 2 years, made its way into the American Heart Association guidelines. But there’s really no process to teach primary care docs, internists, gynecologists, nurse practitioners. I talk about it, I write about it, I’ve been on TV about it over and over, and I’m not the only one. But if we would implement it routinely, we would… healthy [people, on the one hand, and] concerning [people on the other hand] – and the concerning people need to make changes and they need to get evaluated more.

Rebekah Kelley: Amazing. Thank you so much for sharing that. That’s great. What causes heart disease that I do not know about, that I should?

Joel Kahn: Sure. The ones you should know about were discovered 50 years ago – smoking high cholesterol, high blood pressure, high blood sugar, diabetes, and mom, dad, brother, sister had an early heart attack or dropped dead. What have we learned since then? Because that’s all the doctors ask about, 50-year-old data, unfortunately. You want to know about a blood test called your lipoprotein(a) cholesterol. L I P O protein and lowercase a – lipoprotein(a) cholesterol. 20 to 25% of people inherit a kind of cholesterol from mom, dad, or both that can clog your arteries without symptoms. 20 or 25% – that’s 90 million Americans, it’s 1.5 billion people worldwide. Test is a $30 blood test. The problem is, right now there’s no prescription drugs specifically for that cholesterol. So there’s no program going on. 1% of doctors check that in their patients. I’ve checked it in everybody for more than a decade. So I have hundreds and hundreds.

If you find you’re super high, then you need that CT scan we’ve talked about and you need to stay up to date. I’ve written a book on the topic of what to do if you have a high lipoprotein(a) cholesterol. But it can kill people. It can cause stroke. It can cause heart attack or not, but you want to find out if you have it. Obviously we’ve learned more and more that diet is a big factor, more processed food, added sugar and meat-heavy diets with butter, cheese, lard, ghee are promoting heart disease. And we know that over and over. You want to eat whole food, plant-based, brightly colored salads and yellow squash and baked potatoes and sweet potatoes as much, or exclusively – you know, a vegan, a whole food plant-based diet.  A factor, for sure, because we actually – I’m off track – we know new chemicals that are in the tissue of meat that are causing clogged arteries. We can’t check them in the blood, but we’ve learned the science so one called Neu5Gc is the most exciting one. There’s actually something called a red meat allergy people are developing, we never heard before, interestingly, and it seems to attack our arteries. So that’s enough. I mean air pollution, tough one to deal with the relationship between air pollution – and I’m talking just cities, cities in the United States, not necessarily living next to a petroleum refinery – air pollution is triggering heart attacks, strokes, leading to fetal loss, diabetes, dementia… poor air quality. I mean, I think we all want clean water to drink, but clean air debris is a big health issue.

Rebekah Kelley: So then are we seeing more of that happening, if it’s related to pollution in cities that are… more cities than in the country?

There are studies like that that show us this is a real deal. It’s a tough one. Anytime you can be out in nature. Some people have air filter systems in their home. I’m a fan of that. And just being cognizant, standing next to somebody, smoking, standing next to a truck spewing garbage out of the tailpipe – and be a little aware of all that.

Rebekah Kelley: So what can I do today? What actions can I take? What is it that I can do to make sure that I don’t die?

Joel Kahn: Other than looking up and scheduling a heart calcium CT scan, maybe asking your doctor for a little bit more advanced blood work to include the lipoprotein(a) cholesterol level. It’s food. Food’s not enough, but food is important. I mean, whatever your, you know… add a salad to your dinner today. Eat an apple, not a bagel or a donut. Go take a walk after dinner, helps control your blood sugar and lowers your cholesterol and inflammation. Focus today on 7 hours sleep. There’s an interesting two studies from Europe that if you can schedule 7 or 7 1/2 hours sleep versus less, you drop your heart attack rate as much as a prescription drug. So, you know, with cell phones and iPads and all the rest, you know, we often aren’t sleeping the way nature has prescribed, but it’s an important goal. Those are all things you can do today. High tech, but also high touch.

Rebekah Kelley: So with sleep, you know, there’s a lot of sleep apps now, a lot of people are struggling with sleep. I actually, my goal is seven… so it’s, you know, it’s a goal. If I get more than that, I’m super happy. So sleep, food, testing, right? Going and getting things tested. So what else would you say would be the other thing that might be…

Joel Kahn: It’s not a bad goal. You know, the American Heart Association says 22 minutes a day of moderate to vigorous exercise. That’s another goal. 22 minutes a day is not too scary to most people.

Now, finally, don’t ignore snoring and sleep problems. That’s part of the sleep issue. Snoring is more common because more Americans are overweight and obese, and sleep apnea, a real medical condition, is more common – in some people, reversible by losing weight. But if your partner says you’re snoring or you know you’re snoring, it’s very easy to get a home sleep study, actually define if you have pathologic snoring, sleep apnea, and get it fixed. It could be taping your mouth at night so you breathe through your nose, could be mouth devices, could be the, you know, the horrible mask, Darth Vader, that a lot of people wear called C-PAP – but it’ll age your brain and probably age your heart if you ignore sleep problems like loud snoring with apneic episodes. And it’s really easy now at home to get a home sleep study, through a doctor’s office.

Rebekah Kelley: Wow. Thanks, Dr. Kahn. Those are really valuable insights. Dr. Joel Kahn can be found at www.DrJoel Kahn. That’s D R J O E L K A H N dot com. Let me remind you to subscribe and get access to all Humanized videos, podcasts, transcriptions, from all of our thought leaders on personalized health at HumanizeHealth.com. 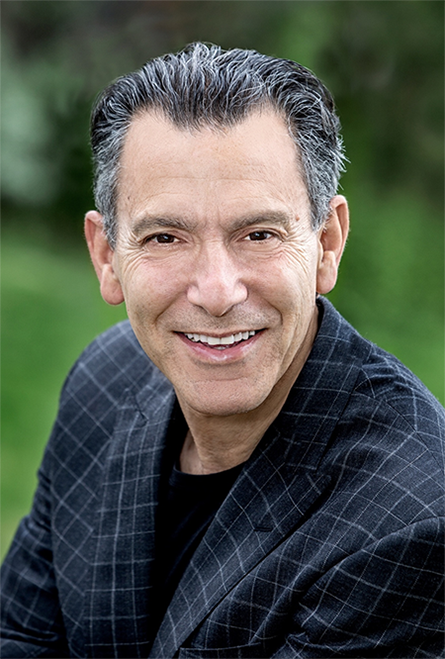 Dr. Kahn has authored scores of publications in his field including articles, book chapters and monographs. He writes health articles and has five books in publication including Your Whole Heart Solution, Dead Execs Don’t Get Bonuses and The Plant Based Solution. His 6th book, Lipoprotein(a): The Heart’s Silent Killer, is about to be published. He has regular appearances on Dr. Phil, The Doctors Show, Dr. Oz, Larry King Now, Joe Rogan Experience, and with Bassem Yousef. He has been awarded a Health Hero award from Detroit Crain’s Business. He owns GreenSpace & Go, a health restaurant in suburban Detroit. He serves as medical director of the largest plant support group in the USA, www.pbnsg.org.