Oxalates: How Healthy Foods Can Hurt 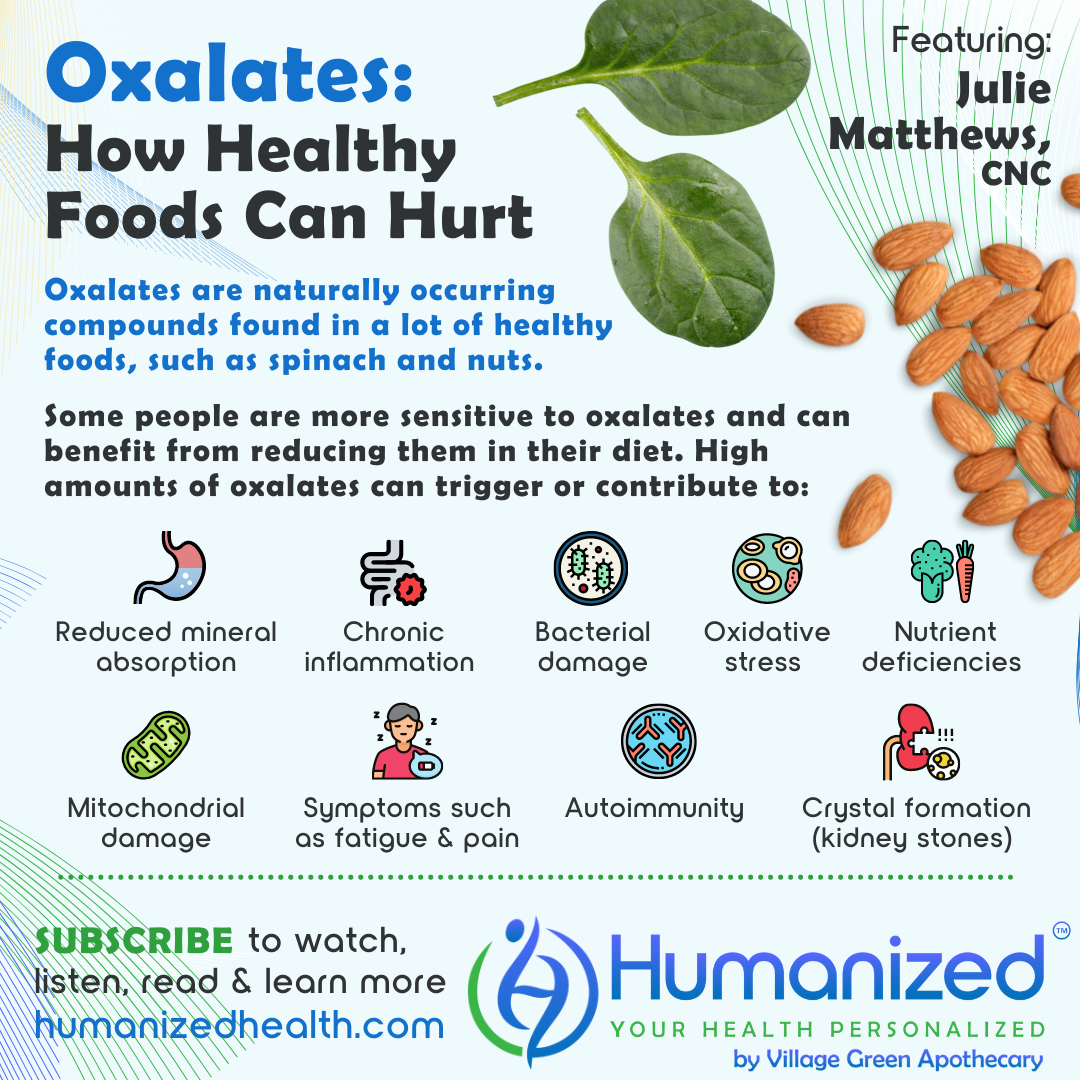 Rebekah Kelley: Welcome to the Humanized podcast, all about personalizing your health. I am your host, Rebekah Kelley, and today we’ll be discussing Oxalates: How Healthy Foods Can Hurt, with Julie Matthews. Before I introduce Julie, I want to remind everyone to subscribe, to get all of our variety of casts in audio, video and transcription at HumanizedHealth.com. I’d also like to thank our lead sponsor, Village Green Apothecary, at MyVillageGreen.com.

Our special guest is Julie Matthews and we’ll discuss what oxalates are and how they can be quite high in some popular diets like vegan and paleo. Julie Matthews is a certified nutrition consultant and published researcher specializing in complex neurological, digestive and immune conditions, most notably autism. She is the author of the award-winning book, Nourishing Hope for Autism, and co-author of a study, “Proving the Efficacy of Nutrition and Dietary Intervention for Autism,” published in the peer review journal, Nutrients. Julie’s approach is based on the personalized nutrition needs of each person and stems from her 20 years of clinical nutrition experience and research. Her methodology of BioIndividual Nutrition helps individuals and practitioners who work with a wide range of disorders for adults and children improve health and healing.

So, Julie, thank you so much for being here with us.

Julie Matthews: So to me, there are some principles of diet that are probably good for a lot of people – eat whole foods, eat organic. But then there are other things that really are personalized to the individual. So something like oxalates is not something everybody needs to, let’s say, be on a low oxalate diet. But I do like to share it with people because it’s surprising how often, well, it’s surprising, I run into a lot of people that have an oxalate issue that aren’t necessarily aware of it. And that’s partly because in the world of oxalates, the scientists only recently started to realize that you could have an issue with oxalates outside of kidney stones. And so now, as we’re realizing much more about it, that we can get into, we’re really realizing that it can be a factor for a lot of people. I don’t want to say a lot, but it can be a factor for some people. And so they might benefit in reducing oxalates, and the level they reduce them is very personalized.

So I feel that too many oxalates, an overabundance of oxalates, is not really good for most of us, but some people really need to go on a low oxalate diet. So that’s where some people might bring in these low oxalate principles, or just even having awareness of oxalates and maybe not go too overboard because you’ll realize that there’s a lot of “health foods” that are quite high in oxalates that may not be doing everybody all the good that they’re hoping for.

Rebekah Kelley: So since we’re talking a lot about oxalates, what are oxalates and can you give us an example of foods that have them, that might be high in an oxalate?

Julie Matthews: Absolutely. So oxalate is this molecule that, in nature, binds to calcium and magnesium and other things. Used by plants to, as basically a bug deterrent, a pesticide, so that the bugs don’t eat the plants. And when they get into our body, that’s when they can form into crystals and create things like kidney stones. So foods high in oxalates are things like spinach, nuts. So to give you an example, the average person eats maybe a hundred milligrams, 150 milligrams of oxalate a day. A low oxalate diet would be more in the 50 range, 40 to 60 kind of range. One serving of spinach has 500 milligrams. And one quarter cup of almond flour has 450. So you can see how fast, especially when you have people that are on these smoothie diets, or, a green smoothie every day… there are green smoothies that are good, so don’t get me wrong. But if they’re putting spinach in it every day, it wouldn’t be advantageous. Or they’re on a paleo diet and they’re eating a lot of nut flours because they’re trying to avoid grains. So again, a paleo diet or even a vegan diet that might be high in a lot of vegetables, it’s not inherently going to be high oxalate, but if you’re not aware, you can easily go overboard on oxalates.

Rebekah Kelley: So Popeye was definitely OD’ing on oxalates.

Rebekah Kelley: So what does it mean that oxalates are anti-nutrient? I mean, is that true? I mean, certainly when you say spinach, do you think about it as being high in nutrients. You wouldn’t think of that as being an anti-nutrient. That seems very nutrient dense to me.

Julie Matthews: Exactly. It’s a strange thing for most people to wrap their head around, but even in the days of Popeye, actually, back in the ’30s, we knew there were studies done on spinach being anti-nutrient. So apparently the cartoon makers weren’t aware of that [laughs], I don’t know.

So, the research on oxalate is really interesting. And so an anti-nutrient is something that, as you said, would sort of take nutrients away from you, rather than be nutrient rich. Now, it’s rich in nutrients, but as I said, because it can bind to things like calcium… not all high calcium foods are high oxalate, but many high oxalate foods are high calcium because nature is binding that oxalate to the calcium. So if you just look at the calcium levels of things, you’ll see a lot of high calcium foods that are also high oxalate, like spinach. The challenge is that you’re not able to access or utilize the calcium that’s in that spinach because it’s so high in oxalate that it binds up all of the calcium, making it unusable.

So they did some studies and they looked at rats and they found that if they fed them… I won’t go into too much detail, but basically, they gave them a diet that was deficient in calcium. And then they gave them a diet deficient in calcium but had the extra made up with spinach. And they found that those that had the full amount of calcium, but half of it was from spinach, those had some significant nutrient deficiency. Their bone quantity and quality was significantly lower than the ones that were just deficient, because what they find is that the oxalate binds to not only that calcium in the spinach, but the calcium in the rest of the meal and the minerals in the rest of the meal, making that food, making a lot of those important minerals not usable.

So that’s really the issue with spinach or with high oxalate foods. And I find it interesting that even though we’ve known that for decades, we collectively don’t acknowledge that, for whatever reason. Or aren’t aware of that, maybe is a better way to put it.

Rebekah Kelley: So what negative effects can oxalates then have in the body, if this is happening, if calcium being bound up? What can happen?

Julie Matthews: So for some people, the issue is that it’s binding to their minerals. And so they’re just going to be eating foods and they’re not going to be getting the nutrients they want. But for other people that have a more significant issue with oxalate, if we are deficient in certain B vitamins, we can actually produce oxalate inside the body. So that’s called endogenous oxalate. Rather than it coming from the diet, we can also produce it internally. And when that happens, then we can get a lot of issues cause it’s right there in the cells. Also, if we’re deficient in certain nutrients, it can get inside the cell when it wouldn’t have otherwise. So certain vitamin deficiencies and mineral deficiencies can cause the oxalate to get inside the cell. And when it’s in there, we can get mitochondrial damage. It can globally cause challenges.

What are some of the other things – I’ll go into some of the symptoms that that can lead to in a second, when we get to that – inflammation, oxidative stress, it can damage the bacteria of our body. So we need that good bacteria to break oxalate down, but when we have too much oxalate, we also don’t have the good bacteria we need. So sometimes people say, oh, just, just get more probiotics in your diet. Well, if you’ve already got high oxalate, you’re going to be killing off, potentially killing off that good bacteria. So we might need a bit of a different approach there.

Rebekah Kelley: So what are the symptoms?

And there can be other challenges as well, but I think those are two of the big ones.

Rebekah Kelley: Thanks, Julie, those are really valuable insights. Julie Matthews can be found at www.NourishingHope.com. Let me remind you to subscribe and get access to all Humanized videos, podcasts and transcriptions from all of our thought leaders on personalized health at Humanizedhealth.com. 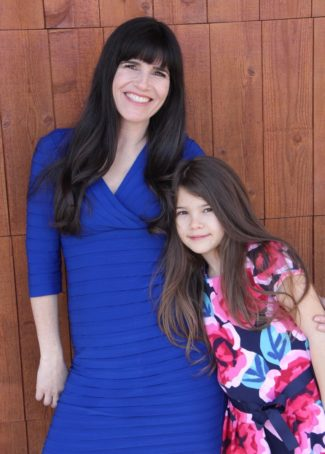 Julie Matthews is a Certified Nutrition Consultant and published researcher specializing in complex neurological, digestive, and immune conditions, most notably autism. She is the author of the award-winning book, Nourishing Hope for Autism, and co-author of a study proving the efficacy of nutrition and dietary intervention for autism published in the peer-reviewed journal, Nutrients. Julie’s approach is based on the personalized nutrition needs of each person and stems from her 20 years of clinical nutrition experience and research. Her methodology of BioIndividual Nutrition® helps individuals and practitioners who work with a wide range of disorders for adults and children improve health and healing. Julie has a private nutrition practice in San Francisco, California, and supports families and clinicians from around the world with her nutrition learning tools and professional training courses.