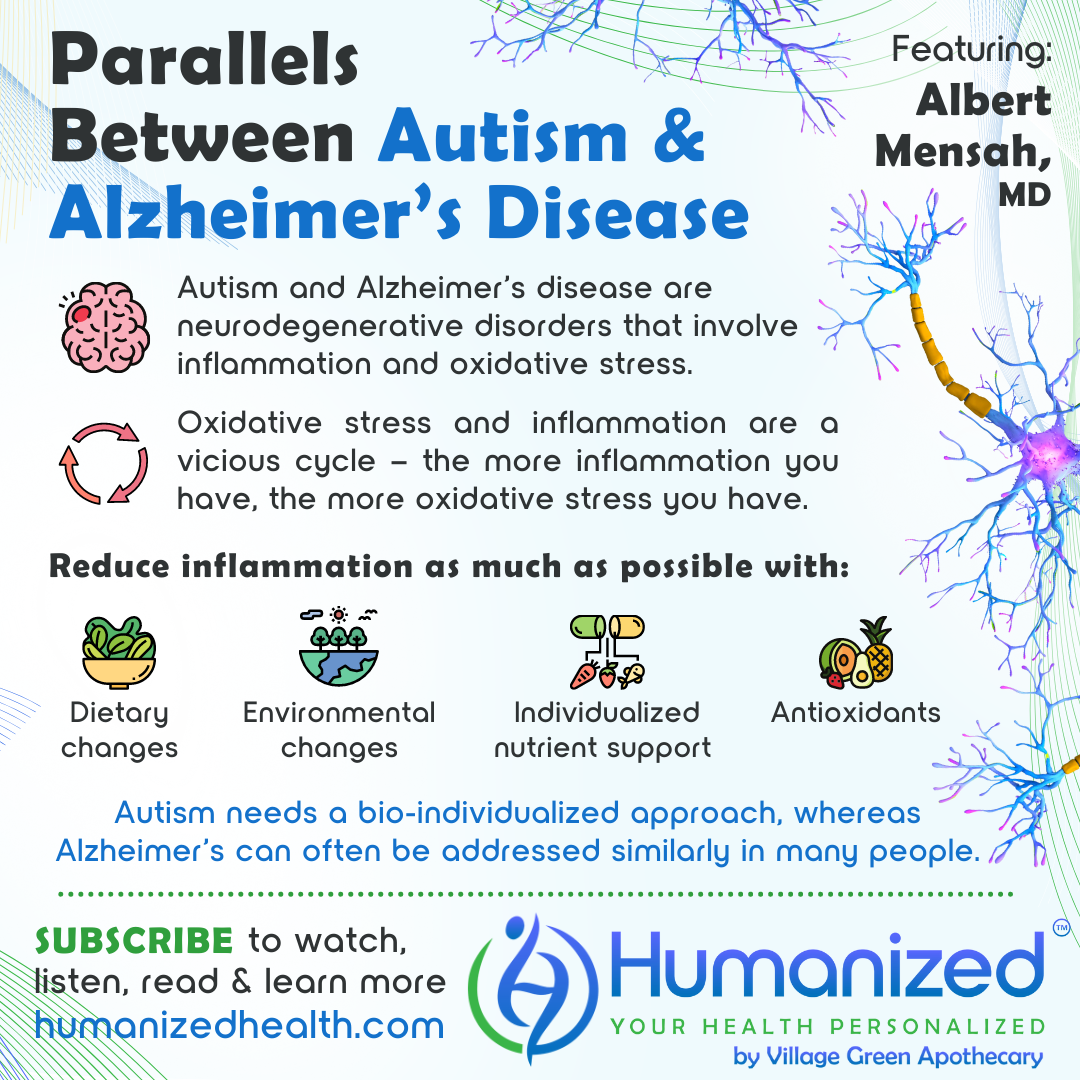 David Stouder: Welcome to the Humanized podcast, all about personalizing your health. I’m your host, Dave Stouder. Now, today we’ll be discussing – when I saw this topic on the board, this is… I’m really looking forward to asking some questions here. We’re going to be discussing the Parallels Between Autism and Alzheimer’s, with Dr. Albert Mensah. Now, before I introduce Dr. Mensah, I want to remind you that you can subscribe and get all of our variety of casts, that’s audio, video, transcription – ready? – at HumanizedHealth.com. And I’d like to thank our lead sponsor, Village Green Apothecary, and you can visit them at MyVillageGreen.com.

I’m so glad to have Dr. Mensah here. Let me tell you a little bit about him. Dr. Mensah specializes in treating mental health disorders through biochemical, lab testing and individualized targeted nutrient therapy. He’s co-founder of Mensah Medical in Warrenville, Illinois, an integrative health clinic, as well as the Mensah Research Institute, a not-for-profit organization dedicated to conducting, supporting, and presenting research that provides scientific evidence of the efficacy of targeted nutrient therapy. Man, that is a mission and goal that is sorely needed.

David Stouder: Yeah. You’ve suggested that there’s a connection between autism and Alzheimer’s. And you know, it’s interesting, I think in people’s minds, autism is associated with young people now and Alzheimer’s with older people. But what is that connection? I mean, they seem awfully different and like I said, they affect different populations. So, what’s the connection that you see?

Autism is neurodegenerative by nature. The way people don’t view it, is that if you don’t realize, if you actually don’t treat an autistic child, they become less and less intelligent over time, in general. They lose intellectual points. They lose as they get older, the capacity to really shift as efficiently as they could. They become harder and harder and harder to fix or correct. And what do we see in Alzheimer’s? Individuals gradually decline. I’m making this sound very simplistic because in some respects it is, and in some respects it’s a lot more complicated. But the fact is, both are neurodegenerative disorders and both respond to very specific treatments that are very similar.

David Stouder: Interesting. Now, one of the things that you talk about, oxidative stress, we might call it brain rust – I mean, what does that look like? Do we actually see spots on the brain? Is that different than just kind of being stressed out? Because as we discussed before, there’s no shortage of stressors in the world today. So can we see physical, quote, “rust” in the brain?

Now, what is oxidative stress? It is basically cellular rust. So if you think about that old pickup truck on the farm that we see in movies all the time, and it’s got the holes in the fenders, and the engine doesn’t work and all that kind of stuff, this is what we would oftentimes call rust or oxidation.

Now imagine that with regard to a cell structure where the cell membranes are holey and they don’t work. They leak. There’s inflammation. The cell just can’t function properly. It looks more like a shriveled up old raisin as opposed to a nice firm grape. That’s what oxidative stress is and the inflammation that goes along with it, and these are extremely key features in both autism and Alzheimer’s disease.

David Stouder: Interesting. So we have, like you say, two key features, both if left untreated get worse with time and age, and then both, we can see evidence of oxidative stress. Now that’s a complicated issue, but in general, maybe you can give us the key points, then. From that perspective, how do we treat autism and Alzheimer’s? How do we manage or eliminate that oxidative stress?

Albert Mensah: There are many ways to look at this and we don’t have enough time unfortunately, to go through the specifics – but certainly not worsening the conditions. We need to keep things as anti-inflammatory as possible. So dietary changes, environmental changes, using the right nutrient support systems, lovely antioxidants – those are all nice adjunctive pieces to stop things from getting worse. But you have to still delve in there and get into the oxidative stress aspect and to stop that from progressing, and even to reverse it. And that’s possible, but those therapies are usually a lot more complicated and a lot of them are, unfortunately, private information.

And they’re complexes, they’re not one singular piece. So it’s not like, okay, take an aspirin or take this. These are programs that are put together to treat the biochemistry and the oxidative stress simultaneously. And they are oftentimes very individualized. One of the big mistakes with autism is that people think you can go out and get a multivitamin, you can go out and get one product that’s going to treat all cases of autism. It doesn’t work that way. Every autistic individual is an autistic individual. And when your world revolves around bio-individuality, you’ve got to approach each person in the same way [with a bio-individuality approach].

Now, what is very different though, is that with Alzheimer’s, here’s where the two are a little bit different – with Alzheimer’s, you can pretty much attack these central areas fairly similarly in almost everybody. So it’s not the hugely individualistic piece that you see with autism. Both have neurodegeneration as a feature, but classically speaking, the Alzheimer’s regimen will work very well in almost everybody, assuming that they’re still in the mild to moderate stages. Where we have trouble is when they’re in the moderate to severe stages.

But these are some of the similarities and the differences between the two disorders.

David Stouder: Well you know, what you just said almost answered the question that came to my mind. What I notice about people is that they don’t turn to mother nature first and in a lot of cases, just in a broad way, I think some aspects of the medical community make people think that diet, lifestyle nutrition is somehow magic instead of central to good health. So they have a condition, they ride it to where nothing has helped and they’re getting worse and worse, and then they go, gee, I wonder if anything from the natural world could help me. And what you just said was, right away, when we see these things, we deal with them from this point of view as well – whatever medications are necessary, we deal with that because the longer we wait, the less chance we have of making an impact. Is that fair?

Albert Mensah: Absolutely. I mean, you don’t take a car to the shop and, if you’re driving one brand, say that, well, gee, you know, what we need to do is instead of fixing the engine, let’s put some duct tape around it and hope that it works. You’ve got to replace the parts. We are human machines, and you’ve got to use the parts that are original, or similarly original parts, to fix the parts that are broken. I mean, this kind of logic really is not that complicated, but you’re absolutely right, in medicine, we’ve gone beyond to make ourselves appear to be something that we’re not. We are fabulously made machines. And you’ve got to use the right parts, the original parts, the similar parts, in order to fix the problem. We would all be incensed if we were to take our Mercedes and our BMWs and try to use, I hate to put it this way, Tesla parts or something that simply would not work with that system. System for system, you have to go in and replace or augment what is there with reasonable biologic parts.

David Stouder: You know, Dr. Mensah, you said that you teach all over the world and I’m glad because that message in general, as well as specifically for things like Alzheimer’s and autism, are really necessary, and I’m impressed.

I want everybody to know that Dr. Mensah can be found at MensahMedical.com, and you can see it on the website, but it’s M-E-N-S-A-H-Medical.com. And I’ll remind you to subscribe and get access to all the Humanized videos, podcasts and transcriptions – some people still like to read – from all of our thought leaders on personalized health at HumanizedHealth.com.

It’s been a pleasure Dr. Mensah, and thanks for being on Humanized Health today.

Albert Mensah: Dave, thank you so much for the invitation. It’s been a pleasure. Thank you. 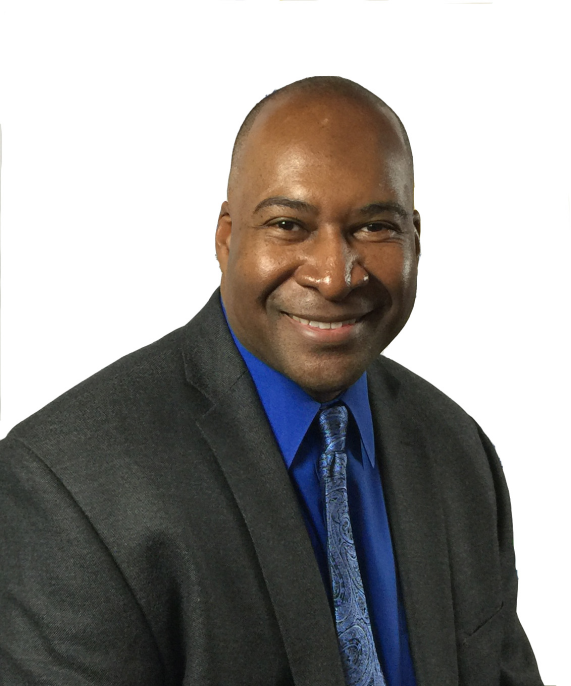 Dr. Albert Mensah is the co-founder of Mensah Medical in Warrenville, IL, a clinic that specializes in the treatment of biochemical imbalances, and the cognitive (and physical) disorders caused by those imbalances. As a physician in this specialized field since 2005, Dr. Mensah has treated over 30,000 patients using all-natural, non-pharmaceutical, targeted nutrient therapy. His practice focuses on the management and treatment of cognitive disorders such as autism spectrum disorder, behavior/learning disorders, eating disorders, bipolar disorder, anxiety syndromes, childhood and adult schizophrenia, Alzheimer’s Disease and Parkinson’s Disease, as well as family medicine. More recently, Dr. Mensah co-founded the Mensah Research Institute, a not-for-profit organization dedicated to conducting, supporting, and presenting research that provides scientific evidence of the efficacy of targeted nutrient therapy and other natural approaches to improving brain function, and to enhancing and optimizing mind/body health and balance. Dr. Mensah regularly presents at conferences internationally, participates in physician training programs, and consults with other health care professionals. Dr. Mensah received his undergraduate degree from Northwestern University (Evanston, Illinois) and his medical degree from Finch University of Health Sciences-Chicago Medical School.