Personalizing Health Through an Understanding of Genetics 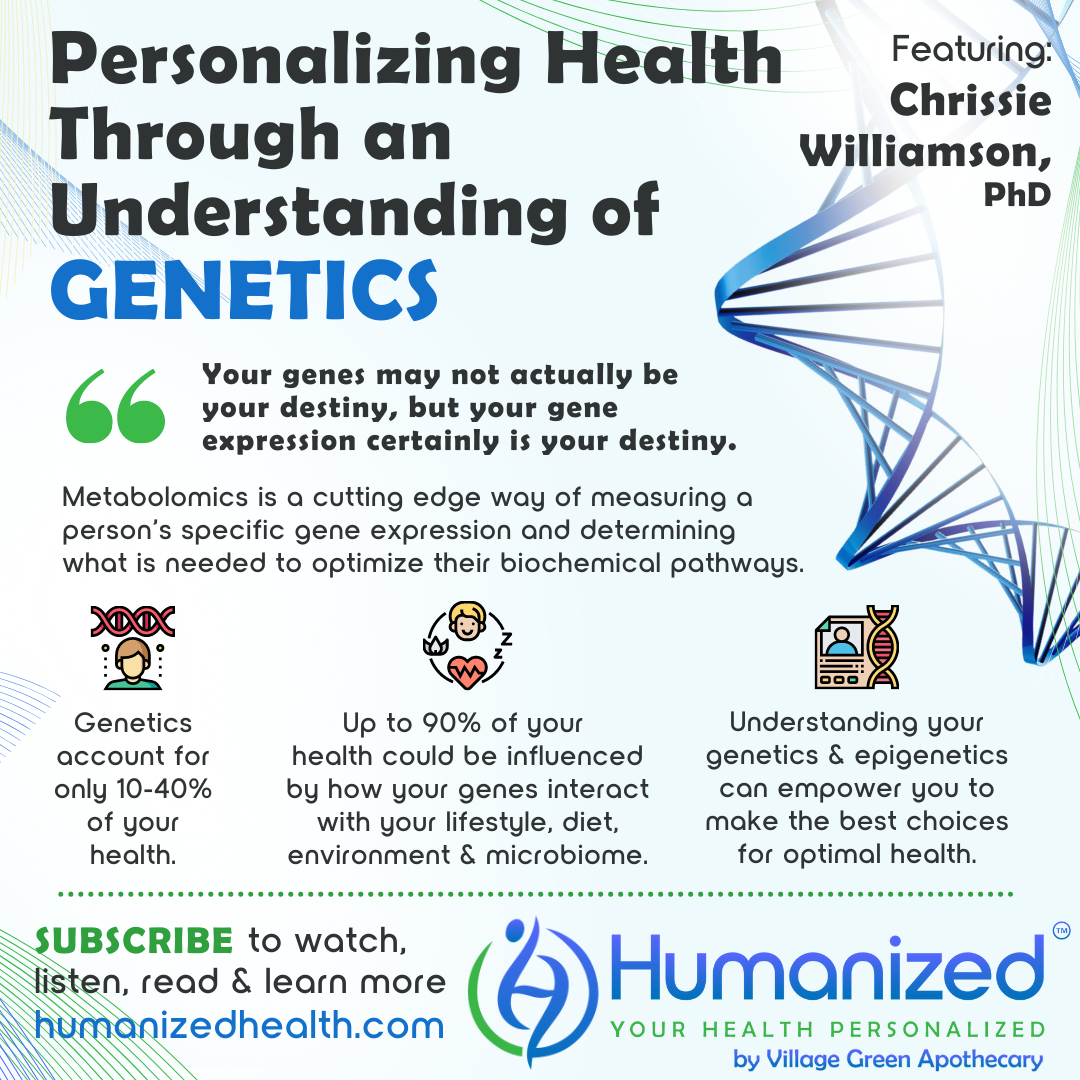 Rebekah Kelley: Welcome to the Humanized podcast, all about personalizing your health. I am your host, Rebekah Kelley, and today we’ll be discussing Personalizing Health Through an Understanding of Genetics, with Dr. Chrissie Williamson. Before I introduce Dr. Williamson, I want to remind everyone to subscribe, to get all of our variety of casts in audio, video and transcription at HumanizedHealth.com. I’d also like to thank our lead sponsor, Village Green Apothecary, at MyVillageGreen.com.

A little bit about Dr. Chrissie Williamson. She is a master of the biomechanical and nutritional sciences. As the owner and founder of Nutritional Genomics Institute, she has dedicated her life’s work to revolutionizing personalized medical nutrition. Chrissie’s systems medicine approach encompasses both cutting edge genomic technology and functional testing, offering the highest level of metabolic evolution evaluation, and lights a path for lifelong healing and wellness. Those are a lot of college words together. [Laughs] Thank you for being here, Dr. Chrissie. A lot of college also, to get all that, right?

Rebekah Kelley: So glad to have you. Thank you.

Chrissie Williamson: Yeah, excited to be here. Thanks for having me.

Rebekah Kelley: So I just want to ask you right away. Is there a strong connection between genetics and health?

Chrissie Williamson: Of course there is. That’s why we have the Nutritional Genomics Institute. So I get this question all the time about what is the connection, and people are often shocked because I tell them that only about 10 to 40% of their health is based on genetics. I think that’s a little bit of a shocker. And then they go, well, gosh, Dr. C., where’s the rest of it? And I tell them that the next 40% is basically lifestyle. And so we’re talking about, gosh, well, do you live next to a farm? Are you exposed to pesticides? Do you eat organically? How well do you sleep? You’re under stress? You know, so stress is here, it’s totally fine. So those kinds of things. And so then they go, oh gosh, that’s 40% and another 40%, or 80%… where’s the other 20%? And that’s what we kind of call our “special sauce” at NGI. And that’s something called epigenetics or epigenetic expression.

And the way that we measure that is something called metabolomics. And so when we’re looking at that, those are special little biomarkers that help us measure gene expression. And that’s something that’s pretty new, pretty fancy, pretty special that we look at. And then these interesting little algorithms that we build, where we look at one genetic variation, or one SNP or single nucleotide polymorphism, which is basically a little spelling error in your genetic makeup or your blueprint, and all of these things have little co-factors or little nutrients that make them go. Okay. And if you don’t have the right thing to make it go – pass go, collect $200 kind of thing – if it doesn’t work well, then you’re not going to make the product that it’s supposed to make.

So when we look at these things, we look at what’s upstream from that SNP, and also what’s downstream. And we’re measuring all the little chemical soup around it. So when we figure out how all of that is dancing together, that’s how we’re actually measuring genetic expression. So it’s a pretty big deal to be able to measure genetic expression. We haven’t really been able to do that until recently.

Rebekah Kelley: Wow. So the percentages together, right? That adds up. So that means you actually have some control, is what you’re saying. It’s not just based upon your genetics, but your genetics can show your trends, right? And where you might have some potential challenges. So what is the interrelationship between genetics and the microbiome?

Chrissie Williamson: That’s also a really big question. I’ve written a couple of papers on that topic, actually. So, without making that one too complicated, bacterium have these little sticky coats on the outside of them. They’re called liposaccharides . And bacteria themselves actually can secrete little chemicals, little chemical messengers, they’re called interleukins. And they can also secrete neurotransmitters. So, that can be problematic in itself. And so our immune system, of course, is coded by our genes, to begin with, and they create these interleukins or these little chemical messengers, and they also control naturally how many neurotransmitters you’re going to have. And so if all of a sudden you have these extra bacteria, or not enough bacteria, that are making these extra chemicals in your body, your immune system’s like, hold the phone, wait a minute. Like you were supposed to have this perfect balance of what’s going on in here and then you’re all of a sudden spewing out all this extra stuff. Your immune system might get a little overreactive, might get a little cranky about that, and maybe give you a disease or two, or just make you feel bad if you’re not having a good day.

So this is why we have a plethora of studies that show the relationship between the microbiome and diseases like autism and cardiovascular disease, Alzheimer’s, Parkinson’s, the list goes on and on and on. It’s also why we use certain probiotics to alter the microbiome and disease states, which is pretty remarkable that we’ve been able to do that.

Rebekah Kelley: Wow. So to what degree then can diet and lifestyle influence our genetic expression?

Chrissie Williamson: Pretty vastly. So, if we kind of go back to those numbers that I quoted you, if we go to the lower end of that 10 to 40%, having 10 to 40% of your health be influenced by genetics – if we go down to 10%, that means that 90% of your health could actually be influenced by your lifestyle and diet. So, your genes may not actually be your destiny, but your gene expression certainly is your destiny. And the way that we measure that is through this omics technology. So it’s really the measurement of that and the control and the tweaking of that, is really where the magic happens. So, it really should influence your choices and give you a lot of empowerment – which is what we’re really trying to do in this next phase of personalized medicine, is not only empower patients, but also empower their physicians so that they can make better choices.

Rebekah Kelley: Can you give an example of, if someone found something out, like what they could do diet- and lifestyle-wise that would maybe affect that?

Chrissie Williamson: Sure. So let’s talk about, since we talked about neurotransmitters… so, let’s see here. So there’s an enzyme, it’s called glutamic acid decarboxylase or, GAD. And so this enzyme lives in the brain and it lives in the pancreas, and traditionally it’s been associated with type one diabetes. But it runs on a special form of vitamin B6 called P5P. And if you have a SNP, or an impairment in this gene, then you’re going to not only have panic attacks, but you’re also going to have what we call type one and a half diabetes. So your insulin levels are going to be really low, which is going to be odd for diabetes, or type two diabetes, but your sugar levels are going to be really high. So it’s an odd presentation, but the way that we fix this, is we give you about 150 milligrams of P5P. But you wouldn’t know that by running a blood test, you’d have to run an organic acids test and look at something called xanthurenate to be able to see that. And of course you can also look at microbiome testing. Bifidobacteria produces GABA, the end product of this conversion takes glutamate and converts it into GABA, so you’re going to have naturally low levels of GABA if you have this, which is what causes you to have the panic attacks. So you could also give them additional bifidobacteria in terms of a probiotic, as well.

Rebekah Kelley: Wow. And that’s something that most people aren’t going to find whenever they’re traditionally going in, having their doctor do their test, or 23andMe, right? This is going to be a whole other level of depth and understanding.

Chrissie Williamson: So, you may find the gene variation on 23andMe, but it’s not going to give you… you’re not going to know whether it’s active or not. So the key thing here… and you may have the genetic variation, but you may not know the symptoms that are associated with actually having an active SNP. And you certainly wouldn’t want to treat it if it wasn’t an active SNP, as too much P5P can actually be dangerous, as well.

Rebekah Kelley: Wow, thanks Dr. Williamson, those were really valuable insights. Dr. Chrissie Williamson can be found at www.NutritionalGenomicsInstitute.com. Let me remind you to subscribe and get access to all Humanized videos, podcasts and transcriptions from all of our thought leaders on personalized health at HumanizedHealth.com. 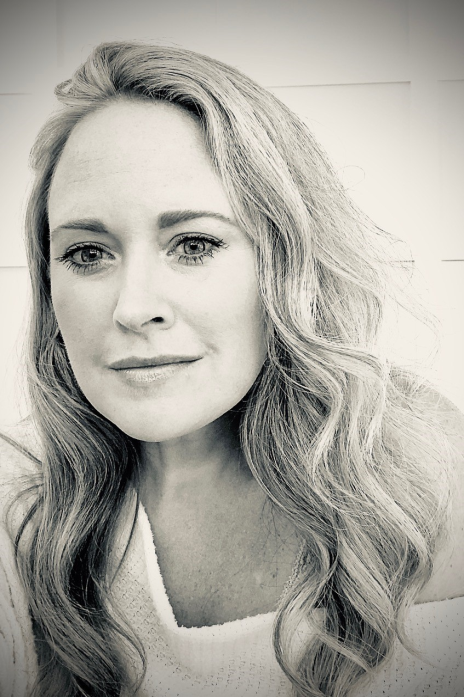 Dr. Christy “Chrissie” Williamson has dedicated her life’s work to bridging the gap between alternative and modern medicine to revolutionize personalized medical nutrition. She is the owner and founder of Nutritional Genomics Institute (NGI), OmicsDx, a software startup and state of the art nutritional genomics analysis company that produces epigenetically validated genome panels, and SNPed, a practitioner education platform for nutritional genomics. Dr. Chrissie’s groundbreaking research and work is changing lives and changing the way that we understand how our genetics, nutrition, environment and experiences work together to affect our health.