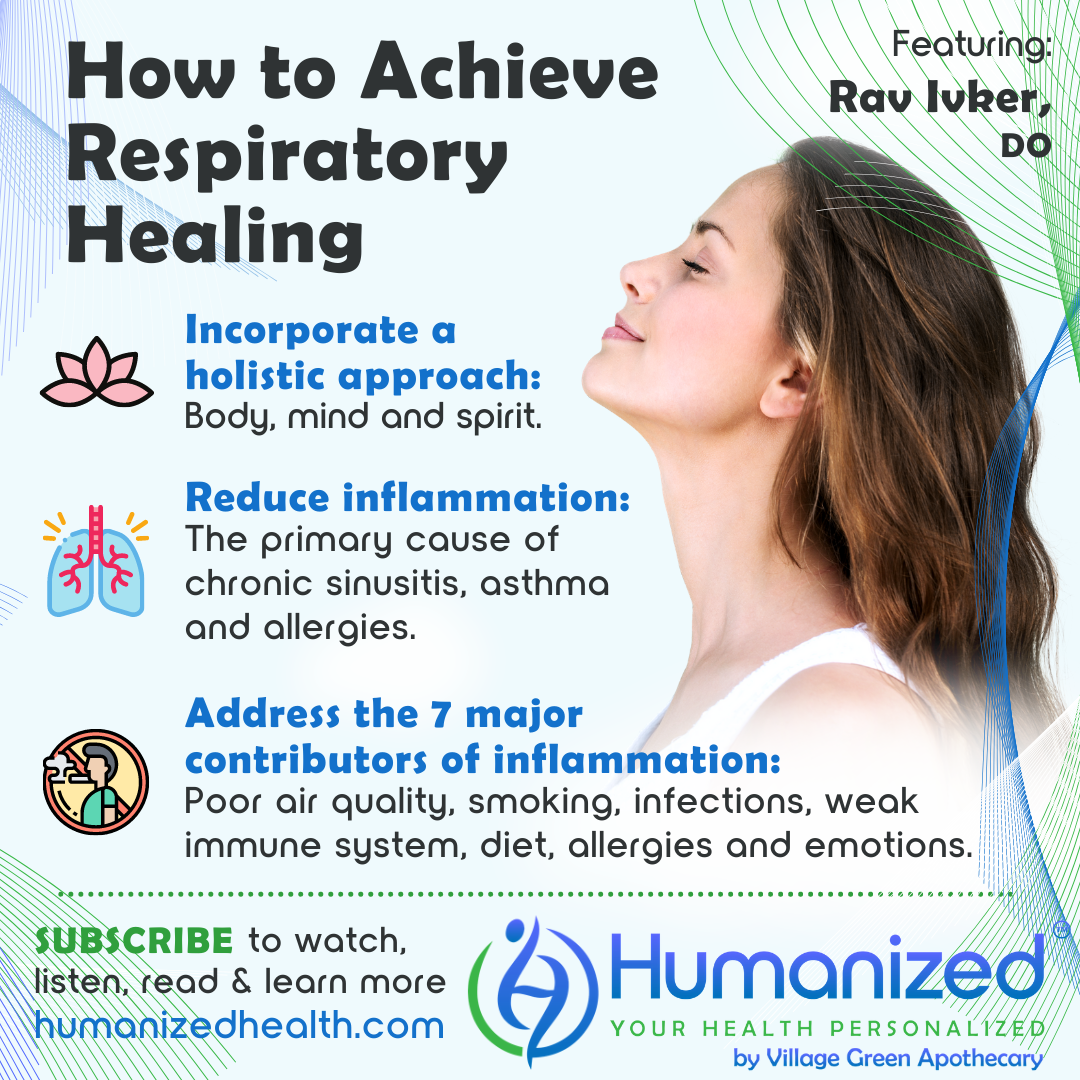 Rebekah Kelley: Welcome to the Humanized podcast, all about personalizing your health. I’m your host, Rebekah Kelley. Today we’ll be exploring Respiratory Health with Dr. Rav Ivker. Before I introduce Dr. Ivker, I want to remind everyone to subscribe, to receive all of our variety of casts, in audio, video and transcription, at HumanizedHealth.com. I also would like to thank our lead sponsor, Village Green Apothecary, at MyVillageGreen.com.

A little bit about our guest. Our guest, Dr. Robert, or Rav Ivker, has been practicing medicine for nearly 50 years. He is a holistic health healer, family physician, cannabis clinician, health educator, and the author of eight books, including the best-selling Sinus Survival, Asthma Survival, The Complete Self- Guide to Holistic Medicine, and his latest book in 2017, Cannabis for Chronic Pain. Since 2011, in his Fully Alive medical practice in Boulder, Colorado, he has worked with nearly 10,000 chronic pain patients using medical marijuana to relieve their suffering. Dr. Ivker is a board certified integrative holistic physician, the co-founder and past president of the American Board of Integrative Holistic Medicine, past president of the American Holistic Medical Association, and a fellow of the American Academy of Family Physicians.

Thank you so much, Dr. Ivker, for being with us. And my first question, like so many diseases today, respiratory problems are on the rise. What is going on?

Rav Ivker: It began in 1980, when I was given what I’d call a death sentence. I was suffering with chronic sinusitis. I was just given that diagnosis by an ear nose and throat doctor who told me that I would have to learn to live with it. He first offered me surgery, but then he did qualify that and said he couldn’t really guarantee that the surgery would cure the problem. So I responded, well why in the world would I want to do surgery then, or have surgery? So I walked out of his office feeling like I just couldn’t live with this misery. I was only 33 years old at the time and the prospect of living the rest of my life with this miserable chronic sinusitis was really awful – I can’t tell you. I made a commitment to curing it. I really had no idea how I would do it, but that was really the beginning of this field that I have focused on now for 40 years, respiratory healing.

It’s important to recognize that healing, that the word “healing” – heal, health and wholly – all are derived from the Anglo-Saxon word “haelen” – it means to make whole. And that health and healing are far more than the absence of disease, but a state of wholeness and balance of body, mind, and spirit. Respiratory healing has now become a specialty within what I call Fully Alive Medicine. That’s how I describe my practice – my practice in Boulder, Colorado is Fully Alive Medicine. It’s defined as the care of the whole person: body, mind, emotions, relationships and spirit. It’s based on one fundamental belief that unconditional love is life’s most powerful healer and the perceived loss of love is our greatest health risk – and respiratory healing is just a method for loving your nose, sinuses and lungs. Those are the three components of the respiratory tract.

There are many contributors to inflammation of the mucus membrane, and the most common and probably the most significant contributor is smoking. This program, the Respiratory Healing Program, which I now call the Fully Alive Breathe Easy Program, is quite effective for preventing and treating, and even curing, these chronic respiratory conditions. But if you continue to smoke, it’s very difficult for the program to be successful. So smoking is really the most significant, but air quality and infection, a weak immune system, your diet, allergies, and possibly right behind smoking as the most significant, are our emotions. The mind-body connection is fascinating, but it’s really an important contributor that is often overlooked, except in holistic medicine.

So optimal air quality is air that’s clean, you can’t see it or smell it; it’s moist, between 35 and 55% relative humidity; it’s warm, between 65 and 85 degrees Fahrenheit; it’s filled with oxygen and negative ions, and fortunately, technology has made it possible to create optimal air quality indoors.

As polluted as our outdoor air is, the indoor air can be a hundred times more polluted than outdoor air, but we have really good air cleaners and negative ion generators that can help to create optimal air quality. And humidifiers.

So, infection. And we’re talking about viral, bacterial and fungal infections. The common cold is the most frequent trigger for respiratory infections. The common cold is the most common trigger for sinus infections and acute asthmatic attacks. So, if we can prevent colds, we can usually prevent sinus infections, as well as asthmatic attacks. Infections are – both infections, sinus infections, bronchitis – are often treated with broad spectrum antibiotics and with multiple courses of antibiotics, and along with an unhealthy diet, it can cause, candida overgrowth, or fungal sinusitis. That term was first used, it was a landmark study from the Mayo clinic in 1999, when they concluded that all cases of chronic sinusitis were caused by a fungus. And I had been seeing that and treating… most of my severe cases of chronic sinusitis were actually fungal sinusitis and are caused by a candida overgrowth.

The diet. You want to avoid… it’s really an anti-inflammatory, hypoallergenic and candida controlled diet. The focus is on avoiding inflammatory foods which are more acidic, refined sugar and sugar-containing foods. Milk and dairy products are right at the top of the list. Red meat is in there, and you want to focus on alkaline foods, the green leafy and low starch vegetables. These are the low-glycemic index and in my books, Sinus Survival and Asthma Survival, I described this diet in detail and I have the glycemic index tables. You want 3 and 6% on the glycemic index, fruits and vegetables. No higher than that.

And, emotions, I mentioned earlier. This I find as the most fascinating. I mean, it’s been so interesting to me, since I began focusing on treating respiratory conditions in the 1980s. In the late 1980s – I had cured my own chronic sinus in 1987 and after that, my practice was really focused on treating chronic sinusitis and asthma and allergies. I saw a striking similarity in the personality traits of people who were sinus sufferers. They tended to be high achievers and perfectionists who held themselves to a very high standard of performance. They were very hard on themselves. And the emotion that was very often associated with sinusitis was a high level of repressed anger, and the anger was often directed at themselves for making mistakes, or perceived mistakes. And the asthmatics were very highly sensitive to disharmony in their physical, emotional and social environment. And there was a diminished sense of freedom of expression. And there was often enmeshment, a smothering love, usually from their mother, and a lack of joy from an acute sense of loss. Their grief – grief was the primary emotion associated with asthma, and grief stems from their abandonment, physical and/or emotional, usually from their father. There was a lack of nurturing touch and affection as an infant or child, and the absence of bonding between parents of the asthmatic child, all of which add up to the perceived loss of love. And to me, it was really amazing to see the similarity of these asthmatics, and with these personality traits. And the emotion, the primary emotion associated with these physical conditions, mind-body connection is so powerful.

At National Jewish Hospital, an internationally recognized, respiratory disease center, they did a 10-year study on children and in families that experienced intense levels of stress, they were three to four times more likely to develop asthma.

Rebekah Kelley: Thank you so much, Dr. Ivker. Those are really valuable insights. Dr. Rav Ivker can be found at www.FullyAliveMedicine.com. Let me remind you to subscribe and get access to all Humanized videos, podcasts, and transcriptions from all of our thought leaders on personalized health at HumanizedHealth.com. 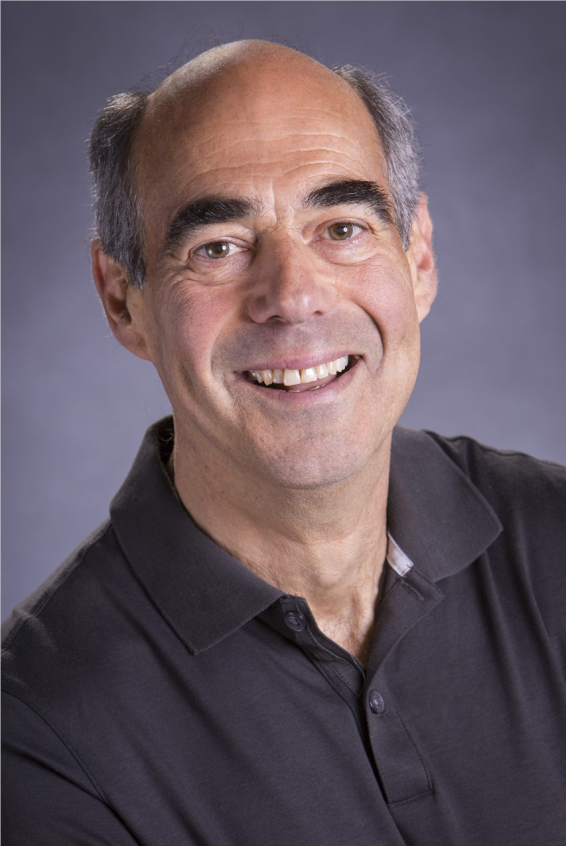 Dr. Robert (Rav) Ivker has been practicing medicine for nearly 50 years. He is a holistic healer, family physician, cannabis clinician, health educator, and author of eight books, including the best-selling Sinus Survival, Asthma Survival, The Complete Self-Care Guide to Holistic Medicine, and his latest book (2017), Cannabis for Chronic Pain. Since 2011 in his Fully Alive Medicine practice in Boulder, CO, he has worked with nearly 10,000 chronic pain patients using medical marijuana to relieve their suffering.