Strategies to Improve Your Brain Health 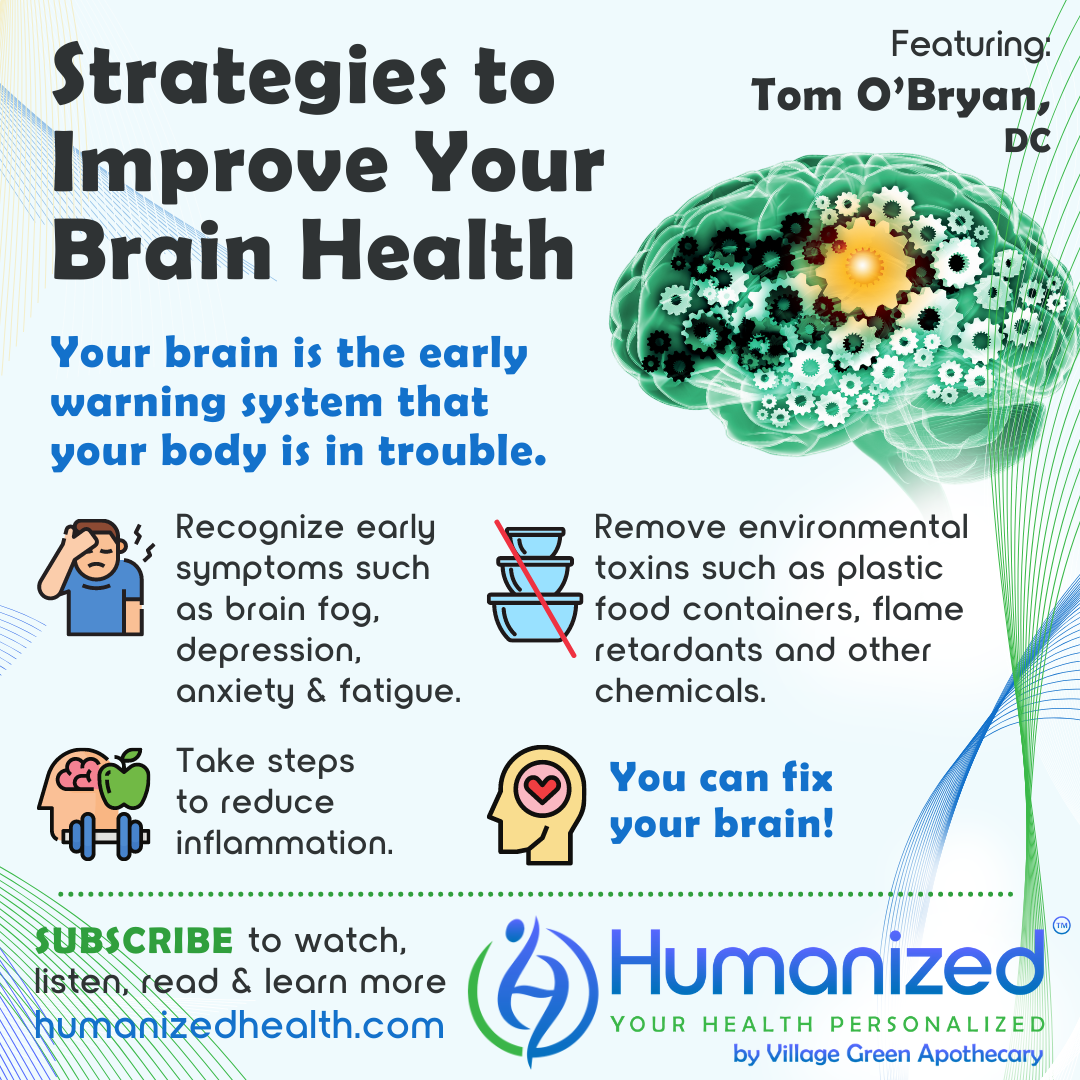 Rebekah Kelley: Welcome to the Humanized Podcast, all about personalizing your health. I am your host, Rebekah Kelley. I’m so excited to introduce our guest today, Dr. Tom O’Bryan. But before I introduce Dr. O’Bryan, I want to remind everyone to subscribe to get all of our variety of casts in audio, video, and transcription at HumanizedHealth.com. I’d also like to thank our lead sponsor, Village Green Apothecary at MyVillageGreen.com.

A little bit about our guest. Dr. Tom O’Bryan is a recognized world expert on gluten and its impact on health. He is an internationally recognized and a sought-after speaker and workshop leader, specializing in the complications of non-celiac gluten sensitivity, celiac disease, and the development of autoimmune diseases as they occur inside and outside of the intestines. Thank you so much for being here with us. We really are excited to have you.

Rebekah Kelley: Let’s jump right into the conversation about brain health and ask, what triggers or impacts our brain function?

Tom O’Bryan: What’s good to recognize is that the brain is the “canary in the coal mine.” In the 1800s, coal miners would take a canary down into the mines with them with the canary singing in its cage. If they stopped hearing the canary singing, somebody would run over there right away. And if the canary had fallen over dead in the cage, they blew a whistle and everyone got out of there immediately – because there was methane gas leaking, or carbon monoxide gas, which humans can’t smell, but it’ll kill them. And so the canary in the coal mine is an early warning system.

Your brain is the canary in the coal mine of your body and your body’s health. We all joke about it because we don’t know what to do. “So I’m getting old, I’m not remembering the way I used to.” Well, how old are you? “Oh, I’m 34.” No, that’s not supposed to happen.

Listen to this: Blue Cross Blue Shield published a report last year. Arguably they are the largest healthcare institution in the English language, I don’t know about the world, but they are a multi-billion dollar profit-oriented industry offering health insurance. They published last year that between 2013 and 2017, in 4 years, there was a 406% increase in the diagnosis of Alzheimer’s in 30 to 45 year-olds.

But the concept is, an anti-inflammatory effort on your part pays big dividends. If this sounds too off for you, just Google “depression and inflammation” and you’ll see the studies just start popping up. So many studies! Or Google “schizophrenia and inflammation” or “brain fog and inflammation,” and you start to understand the mechanism behind why all this is happening.

Rebekah Kelley: I just think, “I’ll go get a cup of coffee,” but now I’m going to be thinking differently.

Tom O’Bryan: Well, you know, some people hear, “Coffee is really good for you; it extends your life.” Some people hear, “Coffee will kill you.” Well, what’s the truth? The truth is if you carry a gene that makes you a slow metabolizer, meaning slow to break down chemicals in your body, the gene called CYP1A2, you really shouldn’t drink coffee. If you have the slow metabolizer gene, caffeine has a much stronger effect on you. Studies show that when they screened tens of thousands of people, based on who carries the gene for a slow metabolizer and who doesn’t, the slow metabolizers who drink one cup of coffee a day have a 15 to 20% increased risk of early death. Two cups a day, it’s over 30%; four cups a day and it’s over 60% increased risk of early death from cardiovascular disease. But only for those that carry that gene.

Rebekah Kelley: I should not be grabbing that cup of coffee from what you’re saying…

Tom O’Bryan: Unfortunately, you may have to find an alternative for that, if you carry the gene. But there’s no mystery about this. Once you learn how to identify what your body feeds off of very well, and what causes more inflammation in your body, it’s not rocket science to have more of an anti- inflammatory life.

Rebekah Kelley: So obviously with coffee, it’s going to depend on your DNA. But what about general toxins in the environment? Do they affect the brain and maybe affect everyone? How do those things affect us? How can we be on the lookout for them?

Tom O’Bryan: It’s jaw-dropping when you learn about this. Arguably the number one medical journal in the English language for children’s health is the Journal of Pediatrics. They published a paper; it was a policy statement. It wasn’t just a summary of a couple of guys’ research; it was a policy statement, which means it comes from the Board of the American Academy of Pediatrics. They want to make sure every pediatrician knows this. They said the Toxic Substances Control Act failed miserably to protect the health of our children; they added “and adults,” meaning all of us. Because the chemical industry paid off the lobbyists or the lobbyists paid off the senators and the representatives to pass this legislation that has no teeth, no teeth whatsoever.

And I’m going to give you another example. But before I give you the example, they said in that paper, that it’s 247 pounds of chemicals per person, per day, that are being manufactured or imported into the United States.

Rebekah Kelley: So, I did hear you correctly!

Tom O’Bryan: That’s five 50-pound bags every single day for every person in the US. It’s 27 trillion pounds. But that number made no sense to me. So I divided it by 365 days. And then I divided it by the number of people in the US and it’s 247 pounds per person per day. That’s why newborn babies have, in the latest numbers, 283 chemicals in their bloodstream, in the umbilical cord blood, that are not supposed to be there, at birth. And many of them are neurotoxins.

So if you take this concept of all these environmental toxins we’re exposed to, and you think you’re not exposed… the flame retardant chemicals on the sofa you’re sitting on are outgassing into the air. You breathe them all day long. “There is no evidence that the minor amount of flame retardant chemicals that leach out of your sofa is toxic to humans.” That’s the legislation they had passed!

But this stuff is a cumulative in your body. Give me 25 years of a little girl putting nail polish on her fingers and toes. Now here’s the study. 2016. 346 pregnant women in Chicago. In the eighth month of pregnancy, they did urine analysis. What did they find? They measured five phthalates in the urine. Now there are hundreds of phthalates, but they just measured five. And they categorized them into fourths. The lowest fourth, the next lowest, the third and the highest. Then they followed the children of those pregnancies after they were born. And when the children turned 7 years old, they did Wechsler IQ tests on every single one of them.

Now, seven points. That doesn’t mean anything to people until you know that a one point difference in IQ is noticeable. Seven points of difference is the difference between a child working really hard, getting straight A’s and a child working really hard, getting straight C’s. That child doesn’t have a chance in hell of ever excelling in school, because mom was high in phthalates that accumulate over 25 years.

Now, just go to Google and type in “phthalates and neurogenesis,” nerve growth. Here come the studies: how phthalates inhibit nerve growth. That’s why 30 to 45-year-olds now have a 400% increase in Alzheimer’s between 2013 and 2017. Because the brain is the canary in the coal mine, and we’re accumulating all of these toxic chemicals in our body.

Rebekah Kelley: So I hope there’s some sunlight at the end, and you’re going to share with us what we can do to have better brain health.

Tom O’Bryan: You bet. The first thing is awareness. We all grow up believing, what do I take to fix this? What pill do I take? Or what food do I eat to fix this?

There is no pill. There is no food. You have to identify where you sit right now in this inflammatory scale. And then identify, where is the gasoline coming from? There is no other way to help ensure your brain is not going to be inflamed. You have to look at lifestyle and the environment you live in. If you’ve got mold in your house, you’re throwing gasoline on the fire with every breath you take when you breathe in the mold. There’s no simple way. I’m sorry; there’s no simple pill. We always want to be told, this’ll fix it for you.

The first step is awareness – and to have the OMG moment. When you have the OMG moment, then you want to learn more, and you start learning all of the little steps. Now, my book is really good for this. The book’s called, “You Can Fix Your Brain.” It’s number one in seven categories on Amazon for brain function, because it’s a really good book. It works; you learn all of this stuff, but there’s no one simple thing.

Rebekah Kelley: Awesome. Thank you, Dr. O’Bryan. This has been very eye- opening. I am definitely going to get your book. I’m still digesting the poundage of toxins that I’m exposed to!

Tom O’Bryan can be found at www.thedoctor.com.

Let me remind you to subscribe to get access to all Humanized videos, podcasts, and transcriptions from all of our thought leaders on personalized health at HumanizedHealth.com. Thank you so much. 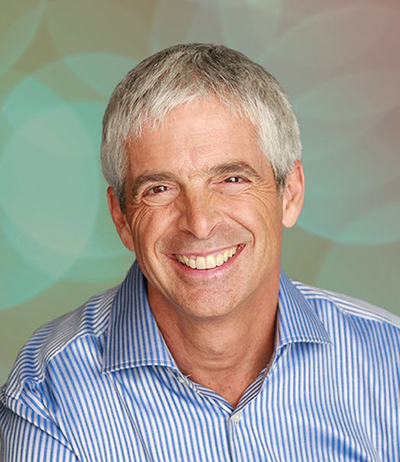 Dr. Tom O’Bryan is a recognized world expert on gluten and its impact on health. He is an internationally recognized and sought after speaker and workshop leader specializing in the complications of Non-Celiac Gluten Sensitivity, Celiac Disease, and the development of Autoimmune Diseases, as they occur inside and outside of the intestines. Dr. Tom is the visionary behind ‘The Gluten Summit – A Grain of Truth’, one of the first online summits, creator of the documentary series “Betrayal: The Autoimmune Disease Solution They’re Not Telling You”, and author of several ground-breaking books. Dr. O’Bryan is considered a ‘Sherlock Holmes’ for chronic disease and metabolic disorders, teaching that the underlying mechanisms that trigger the development of chronic disease are the key to health. He holds teaching faculty positions with The Institute for Functional Medicine and the National University of Health Sciences. He has trained and certified tens of thousands of practitioners around the world in advanced understanding of the impact of wheat sensitivity and the development of individual autoimmune diseases.

You Can Fix Your Brain Sneak Peek. I created this program to give you a glimpse of how you can support your brain health. My approach is not cookie-cutter at all. There is no single cure for many of the diseases and conditions that affect the brain.